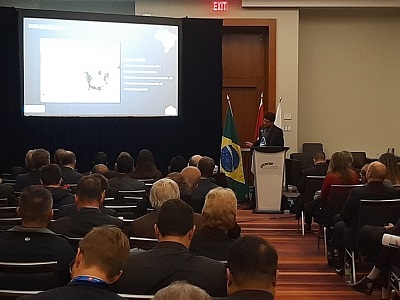 The Geological Survey of Brazil (CPRM) launched on Monday (2/3), at the annual convention of the Prospectors and Developers Association of Canada - # PDAC2020 (www.pdac.ca/convention), Catalog with Prospective Maps to attract new investments in mineral research in the country. PDAC is the main global event in the mineral exploration and development industry, which takes place annually in the first week of March, in Toronto, Canada.

“The initiative compiled maps of nine areas in eight different Precambrian provinces. It is an important tool for investors to make decisions about which areas are a priority for investments in mineral exploration. The results suggest areas favorable to prospecting for gold, copper, lead, zinc and iron”, explains Márcio José Remédio, director of Geology and Mineral Resources at CPRM, which is in Canada, with a Brazilian delegation participating in the event.

The Catalog of Prospectivity Maps of Selected Areas From Brazil, which is available for download (rigeo.cprm.gov.br/handle/doc/21620) presents all the favorability maps already published by CPRM, in addition to unpublished maps. The identified areas are in Carajás (copper and gold), Gurupi (gold), Juma (gold), Tapajós (gold), Nova Brasilândia (zinc, lead and copper), Ipitinga (gold, iron and copper), northwest of Ceará (gold and copper) and western Goiás (gold and copper). Each map is accompanied by an explanatory text and methodology used.

Reduction of exploratory risk - According to the head of the Economic Geology Division, Felipe Mattos Tavares, who presented the catalog to investors and entrepreneurs during Brazilian Mining Day, the maps point out areas likely to find mineral deposits and contribute to increasing assertiveness in the search for new deposits. According to Tavares, the initiative is part of the CPRM Mineral Resources Assessment Program, which offers a series of tools that assist in mineral exploration.

“These tools can contribute to increasing interest in mineral research, as they help to reduce exploratory risk. In projects for the evaluation of mineral resources developed by CPRM, which are more advanced, such as those related to phosphate and potassium research, have proven to have contributed to the increase in the number of research requirements in the areas studied by CPRM. We are expanding this line of action to other critical or strategic resources, such as copper for example, as we have a similar expectation”, evaluates Tavares.

Search for new mineral deposits - in recent years, the Geological Survey of Brazil has made investments in geochemistry, geophysics, geological mapping and metallogenetic studies, focusing on projects in the main mineral provinces of the country to boost discoveries in these areas.

“Brazil is a global player in the production of mineral commodities, such as iron, manganese, niobium graphite and ornamental rocks. We also have an important role as major exporters of nickel, gold, copper and kaolin. But our expectation is very positive, as we have many emerging mineral provinces and enormous potential to be explored. Our future will certainly be one of expanding the mineral sector. And CPRM has a fundamental role for the country to get there”, evaluates the director of Geology and Mineral Resources at CPRM.

Brazilian Mining Day - During the programming of the Brazilian Mining Day, the government presented the efforts it has been making for the development of the mining sector in Brazil, such as offering the portfolio of areas of CPRM, through the Investment Partnerships Program (PPI). Secretary Alexandre Vidigal highlighted that mining is one of the driving forces of our economy. "We are building a strong and modern mineral sector that is not only agile, but transparent, reliable and sustainable", he said.

Vidigal stated that the government will continue to develop and adopt policies, measures and practices to ensure that regulation and governance are complied with. "Our commitment is to boost foreign trade through best international practices, which will allow Brazil to effectively integrate with global trade." 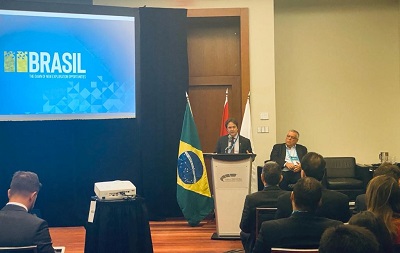 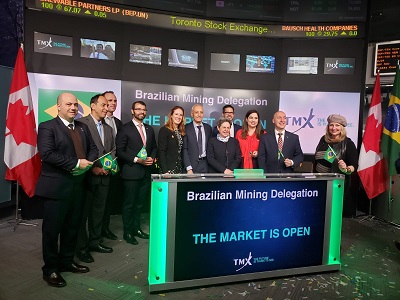 Brasil Pavilion - the traditional space dedicated to Brazilian mining at PDAC, opened on Sunday (1/3), with the presence of members of the Brazilian delegation, composed of businessmen, executives and authorities. Among them, the secretary of Geology, Mining and Mineral Transformation of the Ministry of Mines Energy, Alexandre Vidigal, representatives of the National Mining Agency (ANM), IBRAM and CPRM. 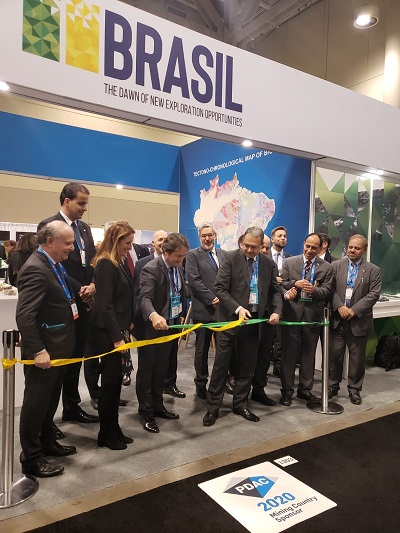 About PDAC - One of the main mining events in the world, the PDAC event is the main voice of the mineral exploration and development community. With more than 8,000 members worldwide, PDAC's mission is to promote a globally responsible and sustainable mineral sector that encourages leading practices in technical, operational, environmental, safety and social performance. In 2019, the PDAC brought together 25,000 people from 130 countries. Annually, the trends, perspectives and challenges of the mineral sector on a global scale are presented and discussed.