The Geological Survey of Brazil (CPRM) and Perth Recursos Minerais signed a pledge agreement on the exploration rights of the Polymetallic Complex of Palmeirůpolis (TO). The Australian made company won the bidding process, held last October by CPRM.

The ceremony that marked the signing of the contract was held on Wednesday (19/2), at the Ministry of Mines Energy (MME), in BrasŪlia. The event brought together representatives of the Federal Government, the winning company, the mining sector, parliamentarians from Tocantins and the city of Palmeirůpolis.

Perth Resources Minerals offered 1.71% in royalties on gross revenue, in the production phase, in addition to R $ 15 million in bonuses, which will be paid in three installments: R $ 1.5 million on signing the contract, R $ 6 million during the survey period and R $ 7.5 million in the mining concession.

In investments, more than R $ 255 million is expected, in addition to the expectation of generating 2,500 jobs. This is the first mining project contract under the Investment Partnerships Program (PPI), which offered the private sector mining rights for the Polymetallic Complex of Palmeirůpolis (TO). 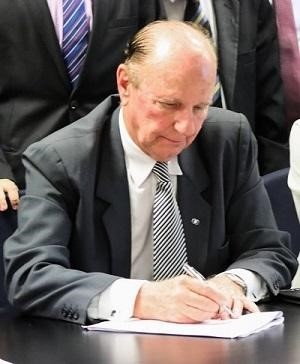 CPRM's Presidente Director, Esteves Colnago, thanked the support he has received from the Minister of Mines and Energy, Bento Albuquerque, to bid on the institution's assets and attract new investments to the sector. Colnago also recognized the role of CPRM collaborators, who, since the discovery of the mineral deposit - in the 1970s - until their geological reassessment for the auction, showed unparalleled professionalism. ďMineral activity is a source of social development. Through the generation of quality jobs, the increase in income and the collection of taxes, the production of new mining projects translates as essential to the country's economic and social growth Ē, he said.

The President Director also said that CPRM will continue to offer its portfolio of areas to private activity, in order to leverage new investments for the Brazilian mineral sector. Colnago recalled that the institution holds about 330 mining rights, divided into 30 blocks. ďWe already have four other projects qualified in PPI and that will be bid on later this year: coal from Candiota (RS), copper from Bom Jardim (GO), Miriri phosphate (PB / PE) and Caulim do Rio Capim (PA)Ē , warned. 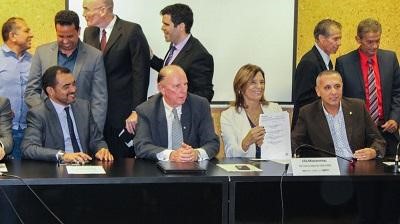 Robert Michael Smakman, CEO of Perth Mineral Resources, said he was excited to start research in Palmeirůpolis. Smakman will meet with CPRM technicians at the Regional Superintendence of Goi‚nia. According to him, the company intends to reinterpret the aerogeophysical and geochemical data, in order to plan surveys that will delimit the size of the mineral deposit.

The polymetallic deposit of Palmeirůpolis contains more than one element in quantities for economic use - such as zinc, copper, lead and gold - and comprises six mining processes, totaling 6,050 ha, all with final research reports approved by the National Mining Agency (ANM).

The secretary of Geology, Mining and Mineral Transformation of the MME, Lilia Mascarenhas Santīagostinho, who represented the minister Bento Albuquerque, said that the signing of the contract concretizes the government's actions to unlock the sector, attract investments and put mining at the base of the country's development. 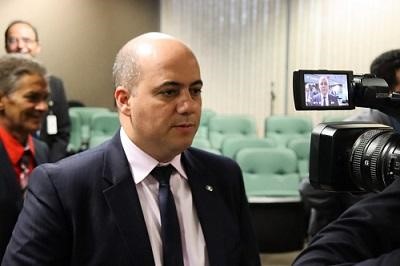 MŠrcio Josť Remťdio, new director of Geology and Mineral Resources at CPRM, agrees with the assistant secretary's assessment. ďThe availability of assets is an important step for the Geological Service and also for the Brazilian mineral sector. We will endeavor to bid on the entire CPRM asset portfolio through PPI. This means more research, regional development and jobs, Ēhe said.

The vice-governor of Tocantins, Wanderlei Barbosa, acknowledged the Federal Government's efforts to make the bid viable. ďWe need attitudes like this to take advantage of the wealth of the Tocantins subsoil and generate job opportunities. This is a historic moment for our state Ē, celebrated Barbosa.

Robson Enťas de Oliveira, from the Investment Partnership Program Secretariat, said that signing the contract shows the importance of the PPI in supporting Brazilian ministries and agencies to make investments happen. "I thank the investor, the Australian company, for trusting the Brazilian government, the MME, which has always supported and sponsored this process, and CPRM", concluded Enťas.


Check out the photo gallery of the contract signing ceremony.